Solo is 4 years old and the baby of our family. He’s a crazy boy and absolutely loves working in all disciplines, he is also very affectionate and adores his brother Mouse. We also have a Labrador called Elmo, he is 11 now and is Solo’s partner in crime, anything naughty that’s happening they are both in the middle of it! Solo has had a dabble in the show ring and done quite well both here and in Ireland, but he’d much rather be working. Solo is enthusiastic with all the working disciplines we do and is the most energetic Newf I’ve ever come across! Solo absolutely loves doing Draught work he has multiple passes up to and including Level 4 and gained his Draught Champion Title at the Waxham Test at Easter this year.He is also a fantastic water dog and an absolute joy to be in the water with. He passed his Achievers Water Level 3 at the first attempt to gain his Water Distinction title at only 2 years old. He also has numerous multi passes at all Achiever’s Water Levels and also at Standard Water A – C.  Solo has also excelled in Nose Work which he loves doing, passing Level 3 and gaining his Distinction title at our Dearnford test last year. He has multiple passes in Obedience gaining a Level 5  Distinction pass at his first attempt at Larkharbour in May this year. My amazing boy was awarded the top award of Best Overall Working Dog at our Terra Nova Awards in 2015 when he was still only 2 years old! He’s done me proud again by attaining this award for 2016 too, way to go Solo!! When Solo isn’t doing Newfie stuff he can be found flying through tunnels and over hurdles every week at Giant Breed Agility. 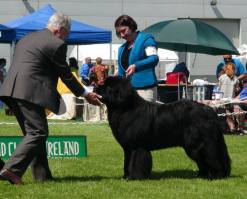 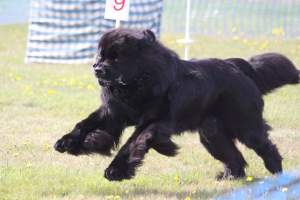